Bringing you the very best of entertainment

Limitation is death, imagination is infinite.

Live in the infinite...and forever dream of things other.

Sick Wit It - A comedy variety show featuring standup comedians, musicians, and sketch comedy with guest actors and the Sick Wit It crew!  Join us and have some fun!

We are also looking for actors, actresses, comedians, musicians, and other performers to appear on our show Sick Wit It, films and other productions.  Contact us now at 559-545-8565or Email candlesandwine@inbox.com

Mysteries & Lore - A journey into the unknown, exploring unsolved mysteries, unexplained phenomena, and folklore that has haunted man's dreams throughout time.

Candles & Wine Productions is seeking horror, suspense, thriller, mystery, and sci-fi short films (under 25min) for our new show PrittyVamp & The Beast, premiering every Friday and Saturday night at 10pm and 10:30pm on ComcastXfinity ch. 93 and AT&TU-Verse ch. 99.  Hosted by an eccentric vampiress PrittyVamp and her untamed companion The Beast!  Each film is given an introduction including title and filmmaker name.  First episode featured films by Evan Sweet and Ryan Rozar.  This is a great way to expose your talent to the world, submit now and your film could be chosen to be on next week's show! 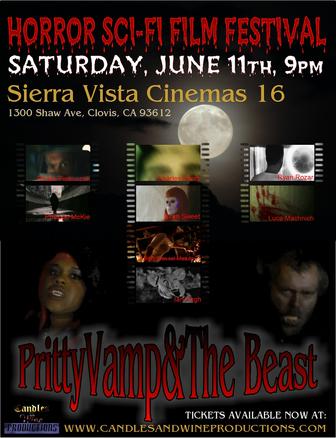